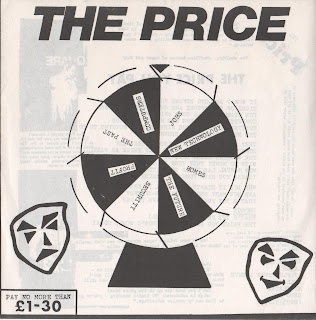 We've been covering the UK's political-punk underground of the eighties ('cause we're specific that way here at MRML), which allows me the honour of bringing to light the largely undervalued  Uxbridge band The Price. 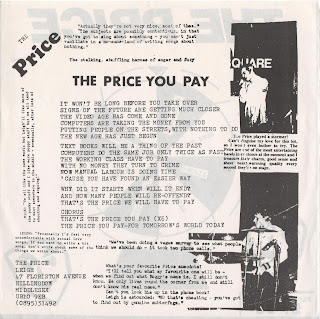 The Price were led by guitarist Leigh Heggarty (his fascinating blog is here), who currently may have one of the best jobs of the 21st century - playing guitar with The Ruts, The Advert's TV Smith, Back to Zero and more besides! Heggarty's guitar word, so in demand these days, is what gave The Price's sound a fluent urgency and a melodic intensity in the same way Mick Jones did in The Clash. 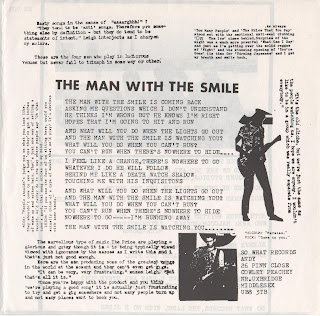 Heggarty had previously led a studio-only band, Society (get it here) whose sole single came out in l980 and then another band The Others, who recorded a strong demo in the mid-80's.


The Price, also featuring Malcolm Andrews on vocals, Huggy Harewood on bass and Mick Francis on drums, did manage to tour and create a small, cogent discography in the late 80's and early 90's. 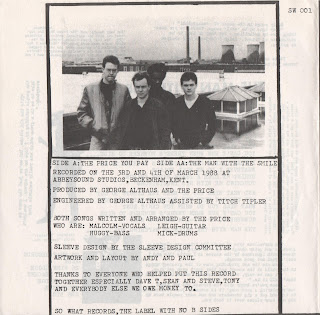 The band's debut single on So What Records (SW 001) has a propulsive reggae track, "The Price You Pay" as the AA side and a fast rocker, "The Man With the Plan as the A-side ("So What Records, the label with no B-sides", went the slogan). It's a powerful opening salvo but there was much more to come!


All rips, scans and info come courtesy of the man himself, Mr. Leigh Heggarty, please consider leaving him (and your friendly neighbourhood blogger) a COMMENT about this material!

Email ThisBlogThis!Share to TwitterShare to FacebookShare to Pinterest
Labels: Leigh Heggarty, The Price