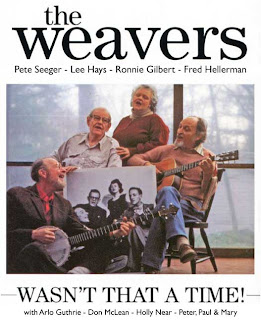 Broken dreams and promises
These are the things they have and hold,
In a country that even persecuted the Weavers.
Did you ever see the Weavers?
"Home of the Brave", Naked Raygun, 1985


My own obsession with music history may all come down to one desperate pledge drive by the North Dakota PBS station back in 1982.  To reel in a few generations, the station played both 'The Compleat Beatles' and 'The Weavers: Wasn't that a Time'. Fortunately, the family's new behemoth of a VCR had recently been semi-mastered (though it did indeed blink 12:00, 12:00, 12:00 till its demise) and so these movies were etched onto tape (in the slp setting, of course) and available for re-watching over and over!  Yes, at one time the trapping of a few waves on magnetic tape housed in a plastic rectangle offered a sort of sustenance. (Sometimes when talking about the cultural scarcity of the eighties, I start sounding a bit like my Grandmother describing The Great Depression.) So does the film still have value in a era where everything ever created is available instantly? Yes.

Five Reasons to Watch 'The Weavers: Wasn't That a Time'?

1. The Sheer Courage
The film acts as sort of alternative history of America and the twentieth century, like some sort of Howard Zinn musical. We often talk about the courage of modern bands who blazed a trail but how many of those were attacked by rioters, dragged before the House Un-American-Activities Committee and then blacklisted by the entire music industry? Hardy souls these Weavers, and 3/4 of them are still alive today!

2. Lee Hayes' Raging Against the Dying of the Light
As a genre, folk music, like the blues, has never had a fear of age. In this film you see Lee Hayes refusing to die quietly. Only months away from his death, Hayes prepares to to perform one last time. During the preparation, the wheel-chair bound man waxes eloquent and cracks wise about his life displaying little fear or regret, only stoic bravery.


3.The Lacerating Self-Deprecation
These "Four decrepit folk singers", in Ronnie Gilbert's words, are eager to take the piss out of themselves rather then be seen as a museum piece. Of course, it's central figure Hays who gets in all the best shots. As he's watching some early fifties footage of the band he spits out the following "Would you look at that; a Barbie Doll and three stuffed dummies! ...If we'd know how witless we looked we would have given up music on the spot and turned to something socially useful, like chicken plucking!"

4. It's Cinematic Influence
Some rock docs go the narrator route as 'The Compleat Beatle's did, some go more Cinéma vérité as Bob Dylan's 'Don't Look Back' did but by splitting the difference and having band lynchpin Hays spin the tale, "Wasn't That a Time' charts a different course. The film's most telling modern influence, would be its being a direct inspiration for Christopher Guest's 'A Mighty Wind' (see this wonderful deleted scene for comparison).


5. It's Musical Influence
Condescension towards fifties folk and it's British cousin, skiffle,  is common amongst rock fans despite the significant influence of the repertoire popularized by The Weavers on The Rock Pantheon;  Bob Dylan, The Beatles, The Rolling Stones, Van Morrison The Grateful Dead et al.

And now, here it is in its entirety, The Weavers: Wasn't That a Time:

Email ThisBlogThis!Share to TwitterShare to FacebookShare to Pinterest
Labels: Weavers