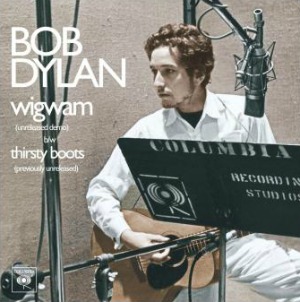 For Record Store Day 2013, Columbia put out a Bob Dylan single with an unreleased demo of "Wigwam" on the A side and a previously unreleased recording, "Thirsty Boots" on the B side. The songs are from the forthcoming Bootleg Series Vol. 10, which is rumored to consist of material from 1969 to 1973, likely meaning outtakes from Nashville Skyline, Self Portrait, New Morning, the Greatest Hits Vol. 2 sessions and the Pat Garrett & Billy The Kid soundtrack.

It's an effective tease for the next volume of the Bootleg series, which, era-wise, is certainly in more dangerous waters then most of the others. "Wigwam" is a demo version, dominated by piano rather then the brass section which Self-Portrait producer Bob Johnson employed. Even better is Dylan's sturdy take on Eric Andersen's 1966 ballad, "Thirsty Boots", which has the passion that so many of the tracks that actually made it onto Self-Portrait lacked.

(Sooner or later this song will get yanked down...)