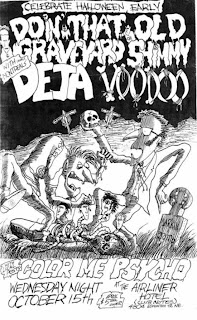 The It Came From Canada compilations contained multitudes. They were anything but seamless; in fact Og created a Frankenstein Monster out of the rotting copses of crude sounds of the past and its stitched togetherness was grotesquely obvious. When they were done the Og crew looked upon their work and declared it ‘cool’.

Last time around, we said that “Og pilloried the vacuousness of the nineteen-eighties by pushing bands who were a hundred different shades of anachronistic: Western-Swing, gospel-punk, garage rock, country blues, psychedelic, 77 punk, lounge-jazz, faux girl-group and cow-punk…” Perhaps we over-simplified.

Many years ago, in a crappy suburban record store (yes, Virginia…) I discovered a whole rack of the Og Catalogue. I chanced Volume One. Something was happening here, and I refused to be Mr. Jones. I still posses the first volume in the shrink-wrap (slit open) with the $6.99 written in white grease pencil. Soon I dug up the rest of the Og oeuvre.

Volume One’s multitudinous variety includes Jerry Jerry’s gospel-punk, Ray Condo’s rockabilly, Dusty Chaps western-ness, Chris Houston’s lounge-jazz and Deja Voodoo’s distorted 50’s pastiche, And that’s side one! Side two is both more cohesive and completely fucked. The Enigmas and UIC are both garage-punk in the mightiest sense of that compound. The Gruesomes’ ‘66 shtick worked live in grimy bars but on vinyl their exactness grated. Then, as compilations often did in the 70’s and 80’s, things get experi-mental. Terminal Sunglasses get hicuppy and trippy on their two tracks while Calamity Janes go all Bongos-and-free verse on you before My Dog Popper (who link this LP to the earlier It Came from the Pit) choose one of their more irritating work-outs to end this LP off on in a Ronald Reagan Acid Flashback kinda way. Enjoy the way it all comes together in a hideously wonderful way. 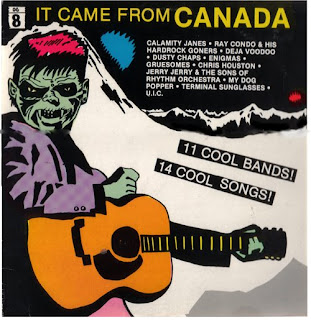 IFC II almost equals its predecessor in a way sequels rarely do. (I refuse to name check the G-dfather series so let’s just compare it to Aliens.) The second LP is another musty distillation of ghost-town genres (garage-rock, hardcore, surf, country-gospel, blues, western swing, spoken-improv and, mais d’accord, a cappella beat-boxin’) with the zany creepiness of Vincent Price in the Hilarious House of Frightenstein. While it lacks a stone-classic like Jerry Jerry’s “Bad Idea”, it features one of the best Gruesomes’ songs (“What’s Your Problem?”) and the more comic side of the oft-furious Guilt Parade (see here for their shockingly-unheard album).

While not all songs (this time the one-song-per-band dictum is adhered to) reach lift-off, they all fit together. This synchronicity is one of the joys of a well-compiled piece – even the irritating bits help vary the flow and eventually find a place in the narrative. 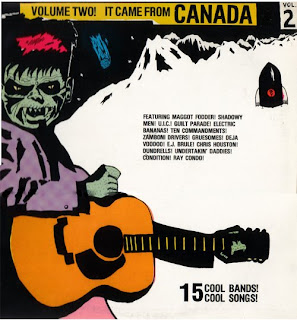 Third time’s the harm – here's where the ghoulish It Came From Canada series, after gorging on the corpses of genres-past, shambles towards its ghastly climax.

Familiar names abound; Deja Voodoo, Condition, Jerry Jerry, Guilt Parade, the Grusomes, Ray Condo, Chris Houston and the Ten Commandments all return from previous volumes. The Dik Van Dykes debut here, with the lead-off track, as they will do for the last two entries in the series. Perhaps the lower-string-less Diks along with the bludgeoning Colour Me Psycho and the nouveau-sludgeabilly House of Knives illustrate that the series, instead of uniting pre-existing primitivists, was now inspiring a new horde. 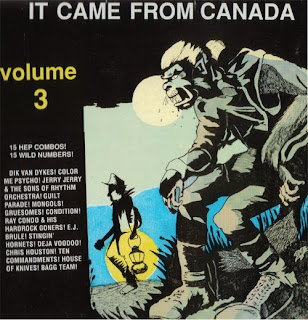 Or try this one.

Email ThisBlogThis!Share to TwitterShare to FacebookShare to Pinterest
Labels: It Came From Canada

Chapter Thirty: Frustration and Heartache is What You Got 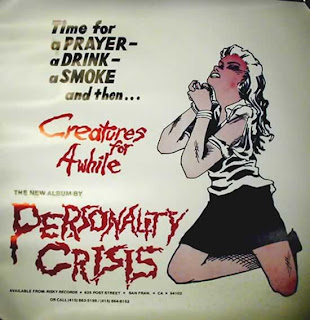 I failed to write a brilliant article on the Winnipeg scene of the late 80’s. I interviewed a few future legends and a few old warhorses and while the bands all did their part I never finished the damn article for the Manitoban.

One of my interviews was with Honest John and his Merry Men, a mild moniker for a band that encapsulated the history of Winnipeg punk rock; including singer Mitch Funk of Personality Crisis and the three former members of the Stretch Marks. Honest John (who have just recently re-formed for a local show) used to perform the Stretch Marks’ classic “Dog’s World with half the audience (yes, including yours tunelessly) singing the ‘arf, arf’ backing vocals. That night, Mitch said that he’d been offered good money to re-assemble PC for an East Coast tour but that his heart wasn’t in that old material.

Well his heart was pumping in the early 80’s when PC with Mitch’s hulking, yet animated, frame out front dominated the scene. Never a hardcore band per se, the band featured stinging, metallic guitar, steady beats and Mitch’s deep bass vocals. A band without a single clear antecedent (the NY Dolls influence is not pronounced) they simply stomped in the same way that DOA, who also had a taste for beer, rock and thrift store clothing, did. On this collection (which has all their studio tracks plus a live track) the hits come thick and fast with the anthemic, “Twilight’s Last Gleaming” and the pummelling “Mrs. Palmer” being early contenders for standout track. The album is relentless - so stay focussed till it's all finished, unlike yours truantly.

Enjoy this neglected masterpiece and be prepared to buy the re-issue when (and keep faith here - even if it’s never been on CD) it arrives. 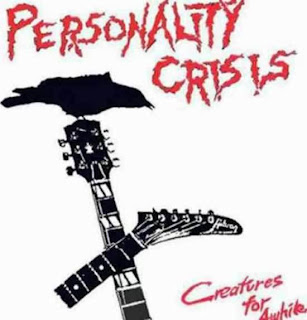