The fourth time around may be the ICFC’s zenith. A logical progression of excavation, yet this volume somehow feels (or it did back then anyway) more modern and less studied.

Deja Voodoo and the Gruesomes return as always, Shadowy Men on a Shadowy Planet prove themselves the only surf-revival bands that mattered, Colour Me Psycho pummel, the little-known Hells’ Half Acre made cow-punk mean something and Sons of the Desert added girl-group ooohing to the Og gumbo.

As for Fluid Waffle legend has it that someone once said “Fluid Waffle?? That’s the worst band name imaginable – you might as well call yourselves…Furnace Face.” The band promptly changed their name and even secured some modest Canadian success in the aftermath.

An indication that things were changing was the Cowboy Junkies. Unknown at the time of release (excepting their low-radar debut) Blue Moon’s molasses-tempo and narcotic melody stuck out in a gloriously incongruous way. Yet it still fit with the steely backwardness that defined Og. The band blew up in the media right after this release, a foreshadowing of the absorption of the post-punk aesthetic into the Adult Alternative format. With a hit band on (or connected) to their label, Og’s undoing was at hand... 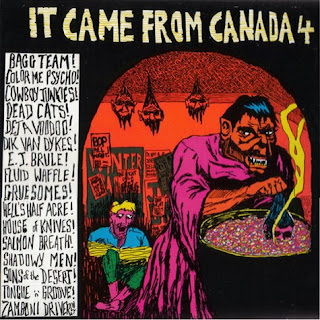