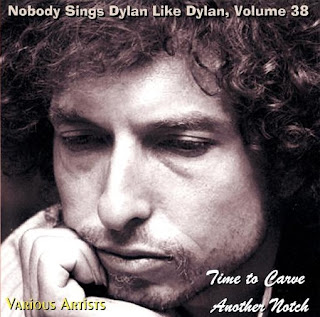 This multi-volume series features artists covering Bob Dylan songs. All of the tracks are recordings of independent origin (ROIO) and hence officially unreleased.

Compiler Jeffs98119 (check out his excellent blog HERE) is back, following his last entry in rapid succession, with another varied entry in this hopefully-endless series. Lots of interesting items herein but my fave was Lucinda Williams doing "Tryin' to Get to Heaven Before They Close the Door". 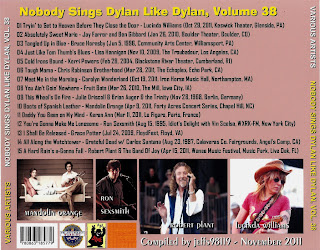 Your COMMENTS on the series and the artists it covers help towards keeping the series alive!!


Thanks to Jeffs98119 for compiling these, to pdiamond for the images, to slugline for the spreadsheet and to Karl Erik Anderson @ Expecting Rain for tagging these for iTunes. 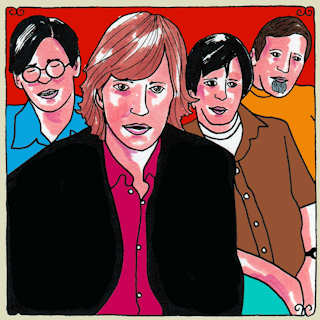 The story goes that one day a guitar-less Rhett Miller, leader of long-running alt-country Dallas band The Old 97's, began composing new songs using familiar tunes and ended up with a keeper, "Champaign, Illinois"*, which used the tune of Bob Dylan's "Desolation Row".  While it's not gonna knock the original out of the rock pantheon, Miller's cheeky borrowing of a melody from one of rock n' roll's most able thieves, to make something louder, shorter, faster and altogether new may still mark one of his career highlights.

"Champaign, Illinois", finally recorded with a Dylan-sanctioned co-writing credit on the band's 2010 album The Grand Theater V. 1, also appears on the band's December 2010 Daytrotter session, alongside a a batch of cow-rockers like "State of Texas", "Every Night Is Friday Night (Without You)" and "You Were Born to Be in Battle".

Let us know what you think of the Old 97's accomplishments in the COMMENTS section (which is where you'll find the Daytrotter Sessions link).


* Interestingly, this is the SECOND song Dylan has co-written with the title "Champaign, Illinois" to find out more visit this site. 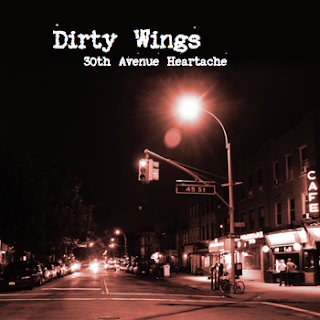 Straight outta Queens, NYC come Dirty Wings, a backwards-looking-forward-moving rock n' roll band. They're kind of band who sound like they love the Stones, The Clash, Bruce Springsteen, Social Distortion and a whole buncha other, less obvious kinds of stuff that they'll only tell you about once you buy them beer.


So maybe fans of newer stuff like Gaslight Anthem, Titus Andronicus, Jesse Malin (and if I ever convinced anyone of the awesome power of The Roman Line, you too) could find shared joy with the Dirty Wings and maybe this modern-day protest anthem could help recall anti-union motherfucker, Scott Walker and send his fellow Koch-financed rollbackers to the dustbin of history:


Let us know what you think of Dirty Wings in the COMMENTS section. 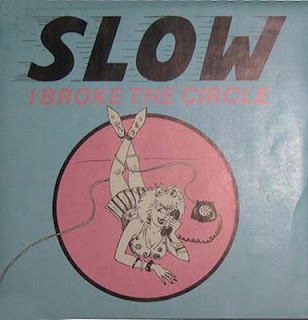 Tracklist
A I Broke The Circle
B Black Is Black


Reactions to the mightiness of Slow may be left in the COMMENTS section (which is where you'll find the I Broke the Circle 7"). 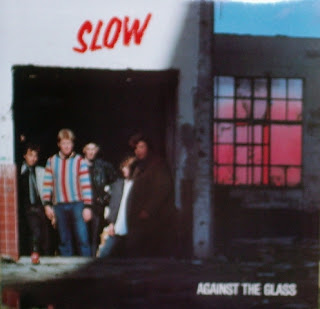 The theory goes that Vancouver's Slow invented Grunge. The authors of a six-hundred page book on The Canadian Underground of 1985-1995 [!], argue that when Slow brought their anguished but hooky psych-garage-punk-metal sound, all wrapped up in flannel, down south they lit some kind of inextinguishable subterranean coal fire. While there is definitely some truth to this theory, it's too tied to this erroneous single-band-who-invented-a-genre kind of thinking. First off, it's pretty clear that the endlessly-dissected grunge phenomenon had numerous for-bearers both ancient and contemporary. Secondly, who wants to be known as the inventor of 'grunge' and go around arguing 'If it wasn't for me there'd never have been a Candlebox or even a Nickleback"? Yes, yes here during the 20th anniversary of Nirvana's Nevermind we're only supposed to talk about the the more vital aspects of grunge but since the garbage utterly outweighed the gold, let's give Slow credit for more than just being a foundational influence in a dead-end genre.

"Have Not Been the Same" is a total head-fuck. That compellingly repellant guitar riff hypnotizes, while those whoo-hoo-hooo backing vocals pull the listener, like sirens of yore towards the rocky coast of self-disgust ("It seems like lately I just can't keep myself in line) only to deliver you to a possibly glorious horizon in the forum of that ferociously buoyant chorus - "Have not been - have not been - have not been the SAME! 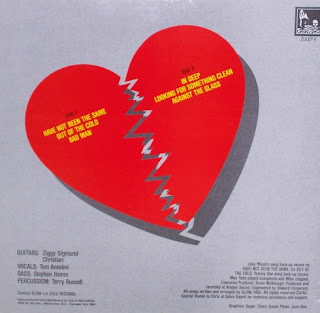 Is there anything else that matches that odyssey on this mini-album? No. But then I'd trade this single song for 99% of all albums labelled 'grunge'. 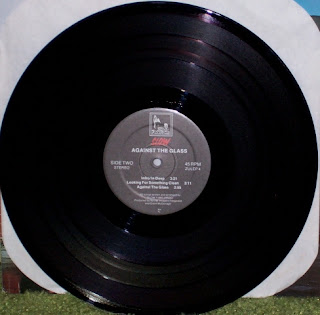 So what do you make of Slow and their legacy? Let us know in the COMMENTS section (which is where you'll find the Against the Glass link). 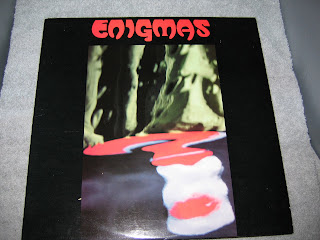 The Enigmas' (more HERE) first EP from 1983  has a batch of garage-rockin' numbers like, "Teenage Barnacle".

(And now for something completely live:

Though I own this EP, this rip came from a Longy way away, as the cover photo may indicate.


So give us you take on the early Enigmas in the COMMENTS section (which is where you'll find  the S/T EP link). 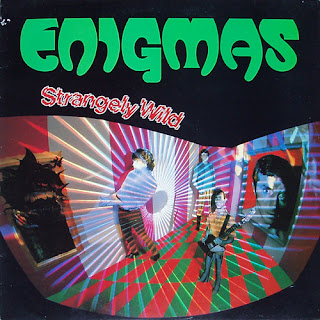 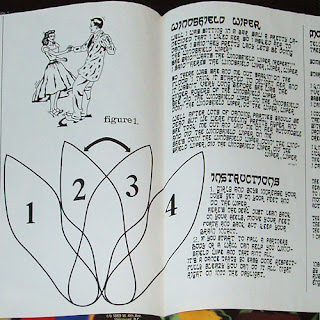 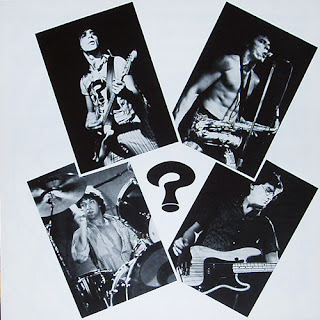 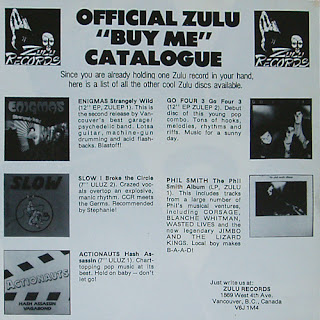 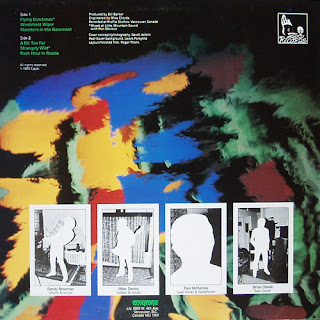 "This time, you're on my home turf, and as you guys might like some history, here we go. The UK punk explosion led to a massive creation of record labels, many smallish towns getting it together to found their town record label and release the local music - whilst London dominated the headlines with all the groups you've heard of: Pistols, Damned, Clash, Stranglers, Ultravox etc. This example of UK original punk regional recordings comes from the banks of the sunny banks ha! ha! of the river Stort, running through the Hertfordshire London-commuter domitory town of Bishop's Stortford, a couple of miles from Stansted airport. Local rockers the Gangsters and the Newton Neurotics would continue to record, links coming up below. The Licks (actually the Epileptics until threatened by legal action from the Royal Epileptic Legion or some such) would take a different path, meeting local rural anarcho-punks Crass, re-recording this Stortbeat single with Pen of Crass on drums and relaunching themselves as Flux of Pink Indians, a group to be counted amongst the UK anarcho-punk movement.

I'll jump to the hits of this LP first:

The one total stand-out is the Sods' "No Pictures" - not the Danish punk group, but the best synth-led punk riff I've ever heard - and an original from way back then!

The Licks' best early song, apart from "Tube Disaster" (a reference to the Moorgate crash), was "Hitler's Still a Nazi". All existing rips package this two-track B side of the first EP as one mp3 starting with the dirge "System Rejects", which is best avoided. Jump straight to 4 minutes 42 seconds for the straight-up, in your face. For those who don't know 'cos they weren't born yet, I was at the Epileptics live EP gig referenced above and had been to a secret Damned gig as "The School Bullies" at the Bridgehouse, Canning Town, East London the week before - the Damned gig started with three hundred people shouting and doing Sieg Heiling ... for twenty minutes .. three hundred strong, all except me and my mate. So singing about "Hitler's still a Nazi" could lead to real trouble at your gigs .. Right on boys, and (think: 1979 to 2011 = 32 years later) the message is just as real now. Didn't Norwegian fascist Breivik just mow down a ton of people, and still no-one takes fascism seriously? 1914 to 1939 was, uh, how many years? 25 years .. so this one was long overdue .. Europe's disease ... we catch it like a cold every 25 years or so, but (sorry) in America, it's become permanent mainstream thinking ... Cup o'tea, anyone?

The Gangsters LP on Stortbeat is available in WAV format, thanks to ratb0y69 here:

The key site for Harlow/Stortford music and for much Crassness et al is killyourpetpuppy, which has posted the Epileptics' "Last Bus to Debden" live at the Triad EP referenced above here:

and a live at Dartford YMCA gig in 1982 as Flux of Pink Indians:

Dave, you are the champion, absolutely love all this extra info!

Volume One is HERE!

Volume Two is HERE!
Posted by jeffen at 6:30 AM 4 comments