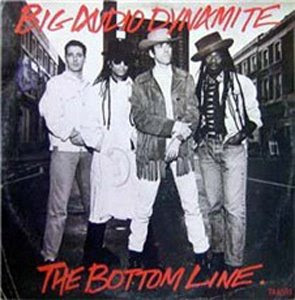 I took some upbraiding for suggesting that "Love Kills" is the First Great Post-Clash song, with the dissenters saying either it isn't a strong enough Strummer work or (more frequently) that the song cannot match the inventiveness or the tunes of the early singles of Mick Jones' B.A.D. (Big Audio Dynamite). 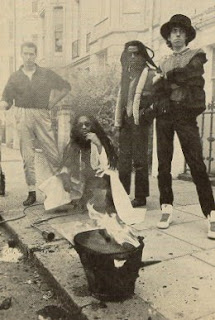 The story goes that before the sun had set on the day in 1983 he was fired from the Clash, Jones already had an early B.A.D. line-up (then called TRAC) in place. B.A.D. (Mick Jones - guitars and vocals, Don Letts - sound effects and vocals, Dan Donovan - keyboards, Leo Williams - bass, Greg Roberts - drums) created a sound fit for the eighties; with high-tech instrumentation, hip-hop accents and traditional pop song-writing. 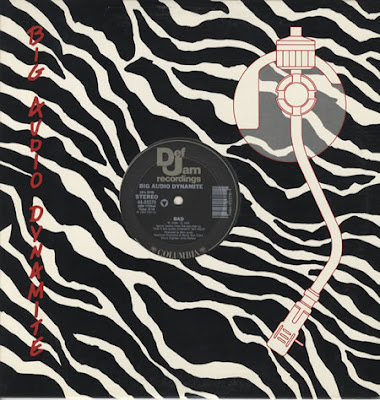 Having this single on Def Jam does gives further credit to the fascinating role of the Clash in early hip-hop history, particularly their influence on the fierce, political work of Public Enemy. 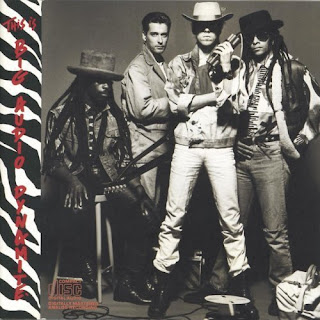 As a Huge Clash Fan (Strummer Division) I've never felt comfortable with B.A.D. It's likely the sampling, the lengthy songs, the lack of guitar and the abundance of keyboards but mostly it's that infernal synthetic drum sound. That hollow-sounding, programmed beat tied Mick's very impressive work to the worst of eighties' production excesses. 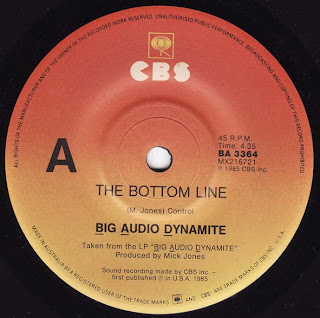 All my biases (a result of having survived the eighties) aside, "The Bottom Line" is clearly excellent - the tune is unforgettable, Mick's guitar still rings out and those dopey lyrics are kinda charming. The best argument for this being the Last Great Clash Song is that the Clash did rehearse it, under the title "Trans Cash Free Pay One" before they self-destructed. Makes you wonder what could've been...


The horses are on the track

A dance to the tune of economic decline
Is when you do the bottom line
Nagging questions always remain
Why did it happen and who was to blame?


{MRML Readers: What claim does this song have to being first Great Post-Clash Song?} 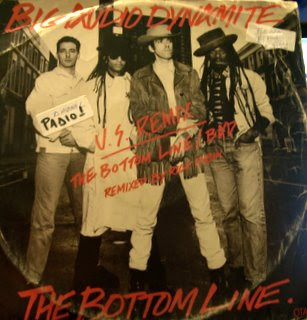 Remember if you like what you hear, not only are most of the B.A.D. albums in print there are also a multitude of compilations available from Amazon, Itunes or your local retailer.

Live version are often better, however those syth drums are omnipresent... 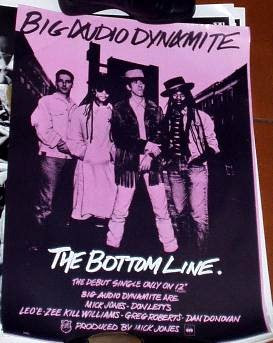 Email ThisBlogThis!Share to TwitterShare to FacebookShare to Pinterest
Labels: B.A.D., The Clash 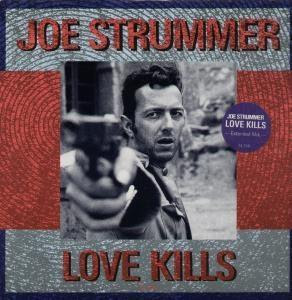 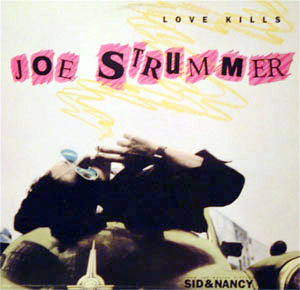 Sure there's some stiff playing, a bit of eighties production gloss and Mick Jones' glorious return was supposedly wiped out in the mix but that's a cool riff, the lyrics are witty and that hook, with it's haunting back-ups, is simply devastating.

Email ThisBlogThis!Share to TwitterShare to FacebookShare to Pinterest
Labels: Joe Strummer, The Clash 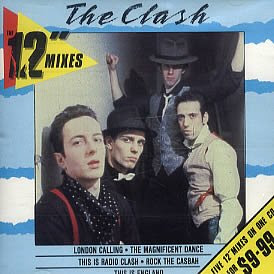 "This is Disco Clash..." goes the standard slag, if you want any more you can sing it yourself. 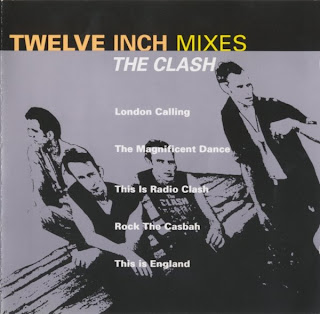 Not much to add that the liner notes below won't tell you, other than this was released in the early nineties, after a re-mix of "Guns of Brixton" and later an ad-sponsored re-release of "Should I Stay of Should I Go" brought the Clash back into critical and commercial grace. 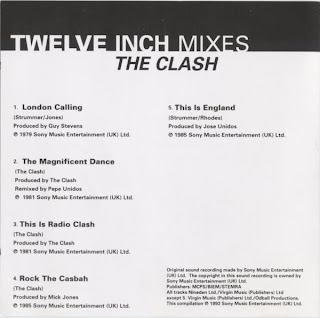 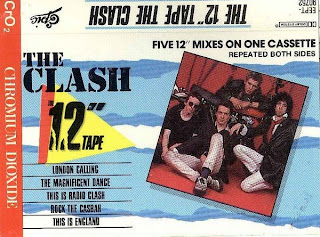 Many people have tried their own Clash remixes (see "This is Dub Clash" here), here's another example.


P.S. Thanks to schoolcraftbump for the CD scans
Posted by jeffen at 6:24 AM 9 comments

Email ThisBlogThis!Share to TwitterShare to FacebookShare to Pinterest
Labels: The Clash

The Clash: Out of Control (Cut the Crap Revisited)

Every self-anointed rock historian knows the story of how the Clash, after the massive success of Combat Rock, dumped their linchpin, Mick Jones. and let their tone deaf manager produce their synth and gang vocal dominated album, Cut the Crap, which is now often considered the most inept, ill-considered follow-up since Operation Barbarrosa. (Of course, MRML and ... er ... Mojo may beg to differ.) 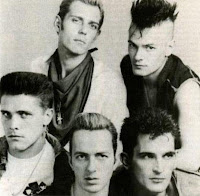 
Now chasing the ghosts of possibilities lost is fruitless and perhaps it's better that Cut the Crap was such a debacle. After all, Strummer was spent, in his own words, "exhausted physically, mentally, every which way". Maybe an average "back-to-basics'' record, with a few fine songs, would have been even less honourable; after all we can still say the Clash were never mediocre - bombastic or self-indulgent, peut-être - but never, ever mediocre. 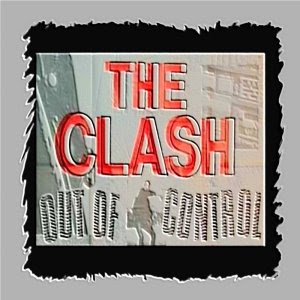 But still, for some of us the "What If's?" stick to us like tar. And in that spirit, here's:

THE CLASH: OUT OF CONTROL (CUT THE CRAP REVISITED)
"An alternate version of the final Clash studio album. Featuring live versions, demos and several tracks performed live but left off the official album."(From the liner notes*)

*The source of the original CD-R is unknown but credit will be given upon learning their identity.

The sound herein ranges from crude to muffled and this is obviously for the die-hards and the dreamers. I've played with the volume on a few tracks and even added the few songs from the 1983 demos (released as a different bootleg, also entitled Out of Control, see here) that were not on the original version.

The rating system works on scale of one to three "This is Englands":

Problematic but worthwhile ("Is better than the C.T.C. a compliment?")

A glimmer of greatness ("Wow, there was a real song beneath the sonic goo.")


1. Dictator (2:57) (Barrowlands, Glasgow 02/10/84)
While the sloganeering still grates, the group rocks and even the recorded-live-in-a-bunker sound can't dull the raw guitar fury.

2. Dirty Punk (3:01) (Brixton Academy, London 12/07/84)
Cliches are once-meaningful words dulled by overuse, nothing in this dunderheaded song ever had much meaning and the big chorus actually works better with the gang vocals.

3. We Are The Clash (2:40) (Barrowlands, Glasgow 02/10/84)
Written in response to a possible fight with Jones' over the band's name (Mick politely chose the worst name ever, Big Audio Dynamite) this version has enough of that the Strummer self-righteous fire to redeem what is one of the most-oft derided songs on a most oft-derided album.

4. Are You Ready For War? (3:59) (Paramount Theater. Seattle 05/30/84)
Kinda funky, especially without the electro-sheen and with an actual human being behind the kit but lyrically it's still stuck in the secular Amageddonism that so gripped the 1980's.

6. Glue Zombie (2:13) (Barrowlands, Glasgow 02/10/84)
Like a cautionary take on the Ramones "Now I Wanna Sniff Some Glue", this not yet fully formed rocker is yet another case where you can almost see the gaping wound Mick Jones left in the band.

7. This Is England (3:24) (Brixton Academy, London 3/10/84)
A little muddy sounding but transformed from wistful ballad into a into a defiant rocker.

8. In The Pouring Rain (5:07) (Paramount Theater, Seattle 05/30/84)
Okay it can't beat Dylan's' "Blind Wille Mctell" from the first Bootleg Series in the Greatest Unreleased Song of All time contest but it sure challenges all the glib dismissals of the Clash Mark II as songwriters and performers.

9. Three Card Trick (3:18) (Stockholm 02/17/84)
Like "In the Pouring Rain" this is another nominee for the Last Great Clash Song and this version is ferocious.

10. Fingerpoppin' (3:22) (Brixton Academy, London 12/06/84)
This song bears scant relation to the wretched track of the same name on CTC though neither track is terribly exciting.

12. Movers And Shakers (2:49) (Gateshead. Newcastle 11/05/85)
No quality bootleg of the Clash's 1985 busking tour of England exists, in someways this is a shame as the performances are loose, spontaneous and fun (unlike much of CTC) but on the other hand it the whole affair seems a bit of an anti-climax, as this song demonstrates.

13. Cool Under Heat (3:01) (Gateshead. Newcastle 11/05/85)
See above and ask yourself what's worse a crappy drum machine or a recording made by some guy who taped his sole mike to whatever the hell found object drummer Pete Howard was banging on that day?

15. National Powder (3:36) (11/83 demo)
The 1983 demos (like the Vanilla Tapes, they're more like rehearsals than actual demos) are a bit a bit bunker-ish and the songs often unfinished, of which this song is a serviceable example of both problems.

16. Galleani (3:06) (11/83 demo)
Again the sound quality is muddy but if you listen closely, you can hear that Clash reggae burbling up; a real loss this one.

17. Are You Ready For War? (2:43) (11/83 demo)
Second version sounds more human than the CTC version but still falls short of real significance.

18. Out of Control (3:03) (11/83 demo)
This fits the template of the CTC material, a basic song structure, sing-along ready chorus but in addition there's a nice ska feel and Pete Howard is doing a shit-kicking job on those very real drums.

20. Backwoods Drive (11/83 demo)
Once more into the mud, Clash fans will hear the start of something here but for the most part it's garbled noise looking for an escape.

{MRML Readers Leave us a comment: Does this ragtag collection improve on a flawed work or not?} 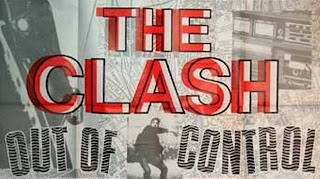 Out of Control (Cut the Crap Revisited) is not available at this time.