In the Next Breath

As Og faded, (and beware of the thorough, yet dubious history of Canadian indie-rock know as “Have Not Been the Same”) so did their CBC-styled vision of a pan-Canadian retro-punk nation. Og had bands from the breadth of the country, even if the heartland (Quebec and Ontario) dominated. Blatant regionalism was looming, with the East Coast bands bringing boring back via Sub-Poop (I actually typed that, then childishly refused to correct it).

Happily, in the wake of the Doughboys and (more pertinently, Lookout Records) little pop-punk scenes flourished all over in the early 90’s (see this post for Bum and the Doughboys goodness – even if that sounds a little dirty).

Ontario had its share of also-rans. The Stand GT, Crash 13 and Bender (who came into being before Matt Groening made an internet search of their name a quagmire) all appeared on comps, put out singles and toured the Great White Wasteland. Bender (Shawn Berger - Guitar/Vocals - Kevin James - Bass/Backing Vocals - Andrew McNenly - Drums) put out their 1994 album Funny Kar on Ringing Ear Records which specialized in bantam-weight pop like Sinkhole. This album's best hooks lie buried just beneath the chugging guitars so listen in till you can sing along to little anthems like "Don't Say No"- like a good Canadian. 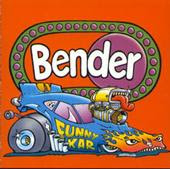 Email ThisBlogThis!Share to TwitterShare to FacebookShare to Pinterest
Labels: Bender