The Clash: Straight to Hell 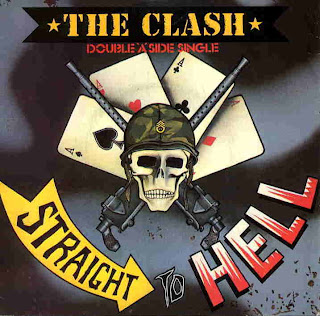 "Straight to Hell" is the Clash's apex. 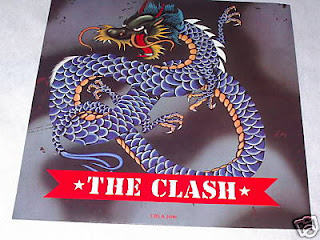 The song was recorded on New Year's Eve 1980 for a planned double album entitled, Rat Patrol from Fort Bragg (later judiciously pruned by legendary rock producer Glynn Johns into the single, if uneven album, Combat Rock). When released as a double A-sided single with "Should I Stay or Should I Go?", that hit completely overshadowed "Straight to Hell". Like a sleeper cell, the song waited, gaining strength, till now, twenty-some years later, when between M.I.A., Lilly Allen, Josh Rouse not to mention Elvis Costello and Jakob Dylan, "Straight to Hell" is ubiquitous.

I came to the song through a T-shirt. In early eighties Winnipeg, a pre-teen heard the Clash in fragments; a radio track here, a stolen cassette there and even that friend's-sister's-husband's L.P. of London Calling with the blessed lyrics sheet! And T-shirts. That skull n' bullets icon and that blunt order, "Straight To Hell" conjured up a raging Clash anthem attacking religious sectarianism. So imagine my shock and disappointment upon discovering that the song was a lengthy, somber Asian-reggae ballad. 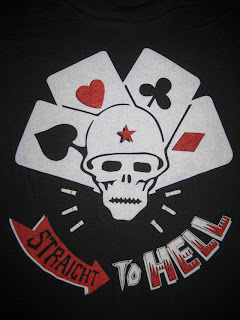 I soon saw the error of my snap judgment. The music is hot, sweaty, tense and claustrophobic - The Deer Hunter and Apocalypse Now transmuted from celluloid to vinyl. Everything's percussive; Mick's playing congas with sticks, Joe's beating a lemonade bottle wrapped in a towel against Topper's bass drum and at one point Joe's panting drowns out everything. 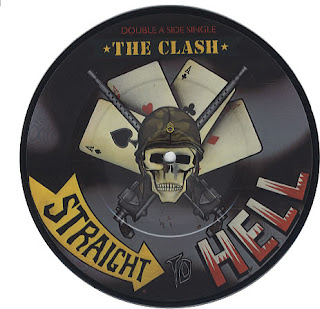 Lyrically, Strummer is at the summit of his power, channelling the raw voices of Woody Guthrie, Allan Ginsberg and Bob Dylan into a seething and menacing State of the World address that roams from Britain to Vietnam to America.The song's brutal account of the world's indifference to its outcasts, makes it like a modern version of Woody Guthrie's, "Deportee (Plane Wreck at Los Gatos)", which decried American mistreatment of Mexican migrant workers back in the forties. This compassion, melded to to such startlingly original music, is what keeps the song alive; after all, the poor, the homeless and the dispossessed are not only still with us, they're now pounding on our doors.

The Clash - Straight to Hell (Live from New York!)


Now, for the masochistic-obsessive, MRML presents twenty-two different versions of "Straight to Hell". You may listen in the jukebox below if you're really strong enough to endure it as one consecutive onslaught


{MRML READERS: Make sure to leave a comment on
"Straight to Hell", the original or one of these covers!}

*A number of these songs are still in print, so if you do download them, for educational purposes only, please remove the files from your computer within forty-eight hours.

1. The Clash
This is edited 7" version - it's too damn short but check out that vinyl picture disc up above!

2. Elvis Costello and Jakob Dylan*
An Elvis and a Dylan (but the not the most iconic ones) make a curious combo that reveals the flexibility of a song, that did not sound so malleable on first listen. (Video here)
(*Thanks to Marky Dread for the nice rip)

3. Amy Loftus and Will Kimbrough
Americana Americans Amy and Will's may not have performed the only alt-country version of the song but it is amongst the most striking covers herein.

4. Steve Ketchen & the Kensington Hillbillies
These Canadians also play the song country-style (or as they describe it "Stan Makita at the Grand Ole Opry") but with more of a bluegrass feel.

5. Lilly Allen (feat. Mick Jones)
Lilly, Joe Strummer's god-daughter, got Mick Jones to sing and play on her cover, which has a few virtues, none of which include having come to any personal understanding of her Godfather's words.

6. M.I.A.
Brit-sensation M.I.A. didn't start the revival of this song but by using the guts of the song and adding a more violent take on the misery Strummer surveyed in his version, she created a 21st century anthem from it ("Paperplanes" video here).

8. The Menzingers
While these boys from Scranton, PA pound the shit out of this song to great effect, they also succeed in making the original song seem even stronger.

9. The Pogues (with Joe Strummer)
This legendary Anglo-Irish band did a full-blooded Celtic-punk run-through of the song live (seeing it almost stopped my heart) but none of the recorded versions really capture that intensity.

11.Emm Gryner
Emm must have figured that if Tori Amos had gained fame by tinkling the ivories on an alternative rock anthem (see Tori's version of "Smells Like Teen Spirit") then she could ten-up Tori with an album of alt-rock standards called Girl Versions and so she did.

13.Bill Janovitz
This former leader of Buffalo Tom does a kinda bare-bones, college-dorm version but with just a hint of malice.

14. Balsam
These Swedish pals of the Hives performed a credible version during what seems like it must've been a pretty burning night of tributes to Joe.

16. Joe Strummer and Latino Rockabilly WarThis song was a constant in Joe's repertoire and one always senses that he understood that it was one of his crowning achievements. (Mescaleros video here)

17. Red Letter Day
This U.K. band (in 1991, they played the Clash to Mega City Four's Buzzcocks) try to make "Straight to Hell" sound like an outtake from Give 'Em Enough Rope with a little less success than I'd have wished for.

18. Cienfuegos
Argentinean band do a Latin-tinged version partly sung in Spanish, all of which woulda made Joe happier than a pig in shit.

19. Moby feat. Heather Nova
In case you haven't heard enough moody version yet, let a former member of of the Vatican Commandoes and Bermudan-Canadian alterna-chick Heather Nova do one more.

20. Hot Club de Paris
At first this U.K. band's acoustic Brit-pop version is just sorta there but it grows on you...

21. The Great Depression
My fellow Danes (on my father's side anyway) do a quiet, menacing take, which reminds me a bit of the National's version of "Clampdown".

22. The Clash
The whole 6:52 one from Rat Patrol from Fort Bragg, later released on The Clash on Broadway box set. 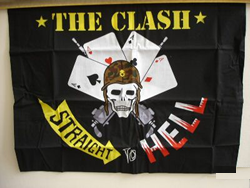 
Straight to Hell
(The Clash)

If you can play on the fiddle
How's about a British jig and reel?
Speaking King's English in quotation
As railhead towns feel the steel mills rust
water froze
In the generation
Clear as winter ice
This is your paradise

There ain't no need for ya
Go straight to hell boys

PSSST...
HEY CHICO WE GOT A MESSAGE FOR YA...
VAMOS VAMOS MUCHACHO
FROM ALPHABET CITY ALL THE WAY A TO Z, DEAD, HEAD 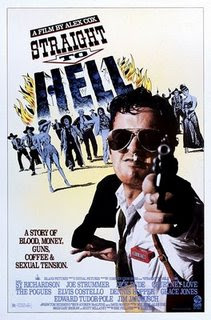 "Straight to Hell", it should not be forgot, also begat a wretchedly wonderful Alex Cox punk rock spaghetti western (in which Joe stars) - you'll get the idea from this scene.
Posted by jeffen at 7:28 AM