Dr. Frank: Showbusiness is My Life 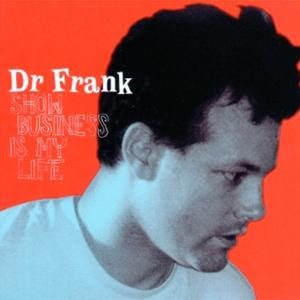 While no one asked, “What is this shit?” when Dr. Frank’s solo album arrived in early 1999, some fans of his pop-punk band, The Mr. T Experience, were similarly stumped. “Where’s the Ramones-riffing and the frantic tempos?” they asked.

And it’s true that in the good Dr.’s oeuvre, Show Business is My Life was a genuine anomaly (“That’s a thing without a name”.) On first encounter, it seemed to commit all the cliché mistakes of the “solo-album-from-member-of-a-well-established-band” genre, like “celebrity guests” (members of Me First, The Hi-Fives, Crimpshrine, The Queers drop in), “one-man songs” (that sometimes sound demo-ish), “unusual instrumentation” (keyboards, horn sections etc.) plus “new stylistic tricks” (check out the falsetto!)

But it didn’t all turn out to be crazy. It was, in fact, a very deliberate break with the past. Frustrated by the “more-of-the-same” reviews of the brilliant and varied Revenge Is Sweet and So Are You in 1997, Dr. Frank threw out a lot of the tricks of pop-punk that were growing hackneyed by the fin de siècle. However, the brevity of the songs, the catchiness of the hooks, the nervousness of the energy and the deceptive use of self-deprecation - all integral to pop-punk - were still there, just given some new arrangements.

It's arguably the most fascinating set of songs the man ever released. The albums whips back and forth between hilarious peaks and suicidal lows like one of those evil roller coasters created by The Joker. The variety here, which echoes dozens of strains of mid-sixties American rock, country and pop, initially threw people for the loop but it’s actually the source of the album’s enduring strength.

While it’s no concept album, the wealth of detail on depression, madness, alcoholism and marital breakdown Dr. Frank employs to show the interdependence of comedy and tragedy in our lives makes it such a complete work that you might stay in your seat and wait for the credits to roll after track thirteen ends.

*
1. She Turned Out To Be Crazy
A blast of guest-star powered garage-rock snarl kicks the album off and provides some of the best punch lines on an album drunk with them.

2. I Made You and I Can Break You
Dr. Frank, alone with his guitars, offers up the album’s first high, lonesome ballad, one that makes fine use of that clever recasting of clichés so beloved of the great sixties Nashvillians like Bill Anderson.

3. Knock Knock (Please Let Me In)
Here’s where the girl group vocals and knock-knock jokes show up – and the result is a Goofy Greats-style novelty tune, which at 2:23 just ends too damn soon!


4. Suicide Watch
Sure, as the title telegraphs, this is a sad, affecting slow one but keep your ear on Dr. Frank, who still manages to throw a sly Dr. Kevorkian allusion into the fray.

6. She Alright
Channeling the sheer drive of Roger Miller' amphetminabilly, Dr. Frank strums his acoustic to the breaking point for this one.

7. Ask Beth
Back to the garage, for this organ-driven rocker that might call to mind Blonde on Blonde era Dylan with less pharmaceuticals and more distortion.


8. Population Us
Another in a long line of “Let’s do it!" songs that abound in the Dr.’s catalog, this one’s got energy and a fantastically busy rhyme scheme though it does really sound like a solo electric demo for an MTX song.

9. Thinking of You
One of the solo album clichés that Dr. Frank assiduously avoids here is the tendency to stretch the songs out. After all, once free from the shackles of band-dictated democracy the first thing many artists do is lay down that long-suppressed harmonica extravaganza or a free verse be-bop piece. But brevity is the watchword on Show Business is My Life as shown by “Thinking of You”, which, like John Prine’s unforgettable “Yes I Guess They Oughta Name A Drink After You”, doesn’t even have a full chorus, just a tag line at the end of every verse.


10. I’m In Love With What’s-Her-Name
The final member of the power trio of garage-rockers on the album (too bad former MTX member Jon Von couldn’t have dropped by!), this one is powered by the irrepressible Hi-Fives.


12. Sad, Sad Shadow
When Dr. Frank chooses to use the word sad twice in the title, it might imply he’s fallen under the cloud of Leonard Cohen but don’t worry the echo-ey guitar work here offers a silver lining.


13. This Isn’t About You Anymore
Those dizzying heights and depth-plumbing lows that mark this album are all present and accounted for on this mini-epic, which crams endless ideas – percussive sound effects, disorienting keyboards, falsetto verses, internal rhymes, a sing-along chorus and a spoken word bridge into an extended metaphor that ends with the killer kiss-off line,

Now you’re a footnote, to somebody else’s footnote
In a book no one ever wrote

*
Show Business is My Life remains little-known and until the Future People of Tomorrow start adding it to the canon of “Neglected Works of Genius” lists, until cool-kid bands start covering these tautly-written songs, until Will Ferrell’s production company options the rights to adapt the album for a full length feature film to premiere at the Slamdance Film Festival later this century, it’s up to you to spread this anomaly around.

Show Business is My Life works its twisted magic best as an entire album. So, for once, I will put up an album that is actually IN-PRINT but with these cavets, since Monsieur Portman didn't exactly relish the idea of his work being given away here:

1. Post will be up for only 48 hours and then removed permanently.

2. A cheerful reminder to buy the album, if you like it, has been placed in the tags - please consider doing so as nothing would honour this blogger as much as even a tiny bump in sales!

3. While this album is available on many file-sharing sites, I'd still like to request that you not share this evaluation version elsewhere.

Show Business is My Life link is in the comments NO LONGER WORKS - go HERE for some live Dr. Frank.

Speaking of comments, give us your take on this album. 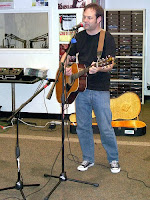