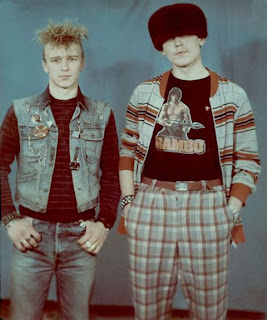 (More excellent Soviet punk photos here)
"I am a sick man... I am an angry man. I am an unattractive man."
Fyodor Dostoevsky, Notes From Underground

So if these Metrojets compilations we've been posting lately sound too well-fed, too cushy or just too damn bourgeois then check out these thirty-six crude and gnarled blasts from the tail end of the Soviet era in Russia. (Some musical history here and here) 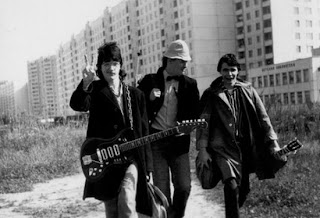 (More excellent Soviet punk photos here)
The Pravda line on on punk went like this; "The music and lyrics of punk rock provoke among the young fits of aimless rage, vandalism, and the urge to destroy everything they get their hands on. No matter how carefully they try to clean it up, it will remain the most reactionary offspring of the bourgeoisie mass culture." That meant that punks weren't just getting marginalized in the Soviet Union but were getting threatened, harassed and even institutionalized. (A story I once read on these broad Internets had it thusly, "In in the former USSR, records were commonly homemade using discarded medical x-rays. These records, nicknamed "Bones", were usually inscribed with illegal copies of popular music banned by the government. They also became a popular means of distribution among Soviet punk bands; in addition to the high cost and low availability of vinyl, punk music was politically suppressed, and publishing outlets were limited".) 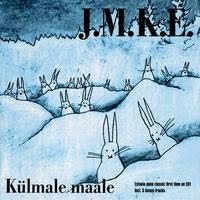 As a result of this oppression, J.M.K.E. were one of the few of these bands whose name made it beyond the Iron Curtain.

Of course. if you read Maximumrocknroll in the late eighties. you've also heard of Naive, who the magazine heavily supported.

The fact that such a collection, sick, angry and unattractive as it often sounds, can exist at all in the light of the brutality of the Soviet regime is a testament to both the strength of the ideals of punk and to the indomitably of the human spirit.

Speaking of which what's your take on all this Soviet punk stuff?