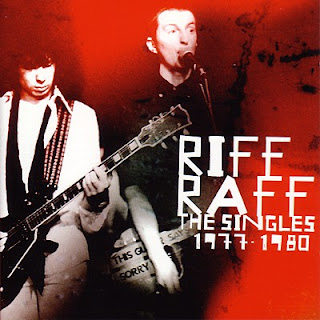 Perhaps Billy Bragg's punk era band, Riff Raff left, as Andrew Collins, author of Bragg's biography, believes, "a prevailing sense of would've" but I suspect he's been wearing his nostalgia goggles too tightly. Riff Raff have a really nifty catalog of under-appreciated songs but there's a thousand bands from this era that can claim the same or better. Riff Raff were another casualty of the cross-fire between punk rock and pub rock, who, by sorta splitting the difference between the two, got 'shot by both sides'. "I Wanna Be a Cosmonaut" is a great ripper, "Romford Girls" (listen here) is very nice pop song while both "She Don't Matter" and "Richard" effectively lays the groundwork for what will come. It's a fascinating collection, well worth it for obsessives, but it lack the inventiveness and the fire that defines the man's solo work. One suspects that it wasn't the birth of punk that changed Billy's life but it's widely-rumoured death.

What do you think of Riff Raff in comparison to Bragg's solo work? Leave us a COMMENT (which is where you will find the link for The Singles (1977-1980). 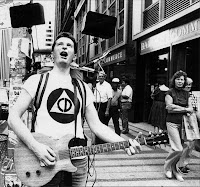