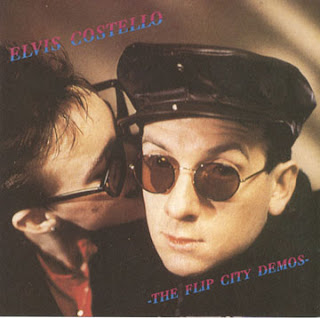 Before the Impostors, the Attractions and even Clover, Elvis Costello had another, more mysterious backing band named Flip City. Back in the mid-seventies, Flip City would have been labeled pub rock, a nebulous term for a non-grandiose country-r&b-rockabilly amalgam which later birthed punk rock. Unlike Joe Strummer's pub rock band, the 101'ers, Flip City, featuring Mich Kent (bass), Malcolm Dennis or Ian Powling (drums), Steve Hazelhurst (guitar), Dickie Faulkner (percussion) and one Declan P. MacManus (guitar/vocals), don't get a whole lot of play in the official narrative. On the Rykodisc re-issues their one contribution is referred to as a "pre-professional recording" (quotation marks theirs). Costello himself further labels his pre-professional work as "blatant imitations" and, "steps in my apprenticeship". 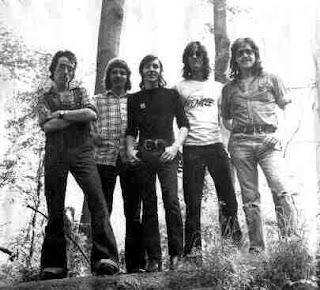 However, for Costello watchers of almost all types, these variations of themes, styles and songs that he would pursue his entire career are endlessly fascinating. Highlights include the proto-"Allison", "Imagination is a Powerful Deceiver" the rough draft of "Radio, Radio", called "Radio Soul", and the early version of "Living in Paradise" which proves how much of Elvis' rapid-fire wit was in place by this time. Finally, we get Elvis and the boys grappling with Bob Dylan's magnificent "Knockin' on Heaven's Door". The result is an enjoyable, if imperfect, approximation of what would have happened if the Band (sans Dylan) had taken a crack at the song. If you're a fan at all, don't miss out. 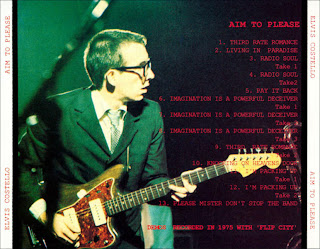 Support the man!
Elvis at Amazon