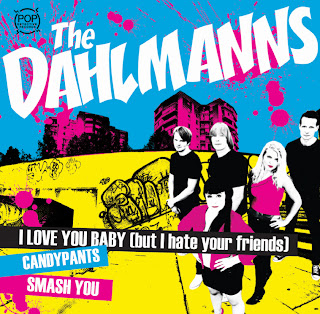 There's a certain thrill  when obscure greatness gets recognized. While some were bothered when Sixpence None the Richer made The La's "There She Goes" the monster hit it should've been or when Gnarls Barkley made The Violent Femmes "Gone Daddy, Gone" known to the word but not I. To me,  such all-too-rare events offer proof that a great song is irrepressible. Sure, I'd prefer that the original becomes the known quantity, like the Ramones "Blitzkrieg Bop" did but to hear something hidden gaining validation is a powerful thing.

A smaller scale example of this phenomenon would be Norwegian 'Primtives-meets-Ramones' band, The Dahlmans cover of "I Love You Baby (But I Hate Your Friends)". The song, written by Andy Shernoff of The Dictators first appeared (I think...)  on a 2006 album by Kitty and the Kowalskis (which I head about here). It's a pretty solid album but that song just leaps out and infects your brain. So, while The Dahlans, who have superb taste in covers, may not make this song a pop sensation, making it as the A-side of a single helps bring the unknown to light.

Pop Detective Records
Posted by jeffen at 9:06 AM

Email ThisBlogThis!Share to TwitterShare to FacebookShare to Pinterest
Labels: Dahlmans