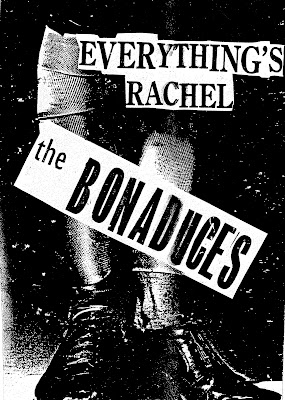 The Bonaduces began as a bad band. Early hopes were modest for these veterans of an odd assortment of Winnipeg bands, including the Superchunk-erific Banned From Atlantis (Doug McLean (vocals, guitar), the girl-pop Buick Six (Mike Koop, guitar), the deeply quirky Garage People (Doug again plus Bob Sommers, bass). However, this two acoustic guitars plus an off-key bassist and an off-time drummer line-up failed to set the early nineties alight. 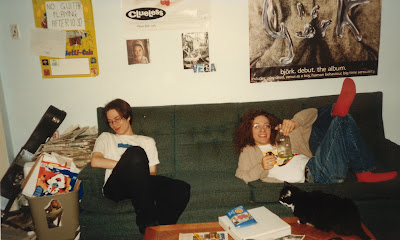 (Doug McLean, Mike Koop and Morph the cat in their unnatural habitat, circa 1995.)

Then, quite unexpectedly, the Bonaduces clicked, morphing into a stellar, if unusual, pop-punk band. Individual member's may have leaned towards indie-rock or classic rock but when crammed into a dark, moldy practice space, things picked up speed and aggression. Complicating matters of influence was the fact that chief song-writer Doug McLean's idea of pop was borne out of pure devotion for the shifting aesthetic of Top Forty radio, whether it be the Beatles or Tiffany, or Ace of Bass or as Doug once "confided" to me, “You know, since I bought the new Chynna Phillips album, Naked and Sacred, I no longer feel the need to eat.” 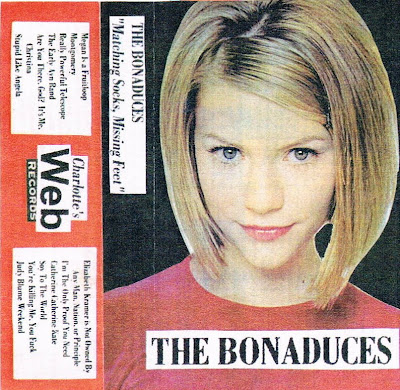 The newly-electrified band chidingly referred to the drastic change in sound as their, “New, More Jeff-Oriented Direction” (for this author’s notoriously narrow taste in high-speed pop). However, the band had actually just stepped up to the challenge of accompanying the increasingly sophisticated compositions Doug was firing off at a terrifying rate. While they still bounded about the stage, Koop and Bob added their own shadings to the songs, the most significant addition being their backing vocals which drove the band to new heights of choir boy brilliance. “Soy to the World” which also features Propagandhi’s (see here) Chris Hannah on background bellows was an early, striking example of this group approach.


This stronger, tighter, louder band risked obscuring Doug's lyrical voice, an unusual one in any genre. Doug had a literary bent but not so much of the poetic variety endemic to ambitious rockers but rather the bent of a short story writer. Each song is a tautly constructed narrative, with carefully delineated characters, often written from the point-of-view of a teenage girl (which back in the P.C.-minded mid-nineties was called "voice appropriation".). 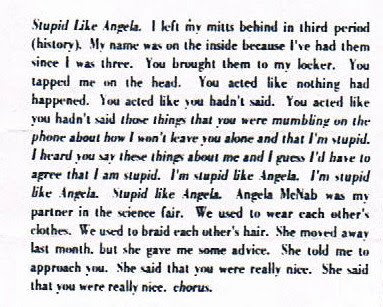 Their 1995 tape, Matching Socks, Missing Feet, is more cohesive and better recorded than most demos. That said, time has done its decaying work to the magnetic tape though even with the hiss, these are clearly the songs of a band that had begun badly but was fast-approaching greatness. 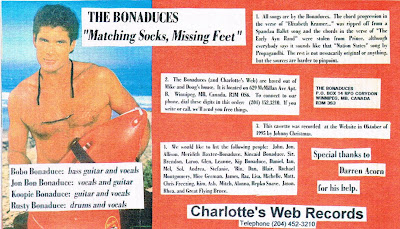 
As a follow up, the boys released a split cassingle with la-la girl-pop band Be'hl and, as was the style at the time, they each covered one of the other's songs. The Bonaduces, with clashing guitar lines and and vocal parts, shine as a group on their cover, "Breathe You" and Doug's teen-girl conflict ("Monica and Veronica") some how feels more personal, with the characters being more like proxies. Or perhaps we're over-analyzing a sing-along pop song. 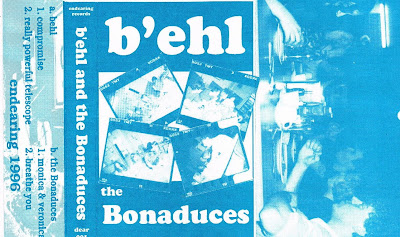 Download the cassingle (Bonaduces side only - I'll fix that one day I promise.)

For any Manitoba readers (hello?)
the Bonaduces
will play a reunion show at the
Lo Pub on June 20th.
Don't miss it!
Posted by jeffen at 8:02 AM

Email ThisBlogThis!Share to TwitterShare to FacebookShare to Pinterest
Labels: Bonaduces