The Band: Philadelphia Academy Of Music (1969) 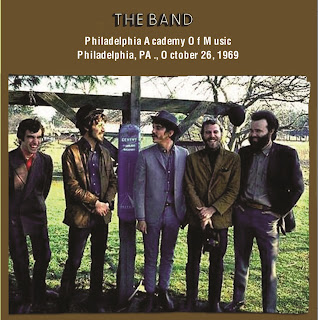 Artwork by rufy
While there may be greater fans of The Band in the world than me, I do know an historical find when I see one. While this bootleg is a little distant-sounding (let me remind you that this is live audience recording from nineteen-fricken'-sixty-nine!) it's a stunning document that derives from the absolutely sweetest period in The Band's history. That is, of course, the time following the recording of both Music from the Big Pink and the eponymous follow-up, The Band. This is the time after The Band's collaboration with Bob Dylan had rocked the world (and resulted in The Band's having three Dylan compositions - two of which were rare co-writes - in the set; "Tears of Rage", "This Wheel's on Fire" and `I Shall Be Released`. Of course The Band`s own song-writing was at its absolute peak in this time as the slew of songs branded into our consciousness from this set list like, `The Weight`, `Cripple Creek`and `The Night They Drove old Dixie Down` prove. So please accept this rarity as my belated Canada Day present to you (heck a present to myself as this was recorded four months after the date of my own birth!)

"This one is absolutely essential for any Band fans - recorded a month after the release of the second album, the band is in fine form. The recording itself is remarkable for a mono audience tape from the late sixties. All the instruments are well balanced and clear, and the audience is present but never overpowers the music. Spectral analysis shows that it is lossless and as far as I know it's never been shared in any form before. I got the show in a private trade over a decade ago - apparently, my source got it from the original taper who was concerned about possible bootlegging and requested that the recording keep a low profile. I've abided by that request for years, but this show is too great to keep it hidden for any longer. "
mrbun2729 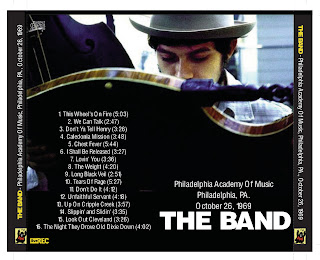 NOTE TO LISTENERS: At the explicit demand of the original uploader, mrbun2729, this show is offered here only in .flac format. If you are at all uncomfortable with this wonderful-sounding but wildly cumbersome format simply convert it 320 kbps MP3's using a FREE version of a program like Switch Sound Converter.

Email ThisBlogThis!Share to TwitterShare to FacebookShare to Pinterest
Labels: Bob Dylan, The Band