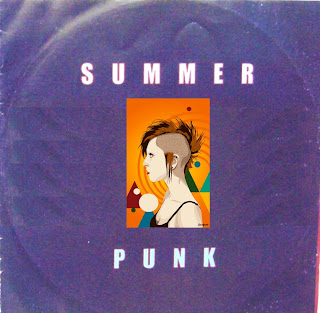 (image borrowed from here)
Well by now radio stations are pumping out dance-pop tracks that they are hoping will be designated the song of the summer but for me I always turn to the sometimes kinda literal-minded pop-punk underground for real sounds of the summer season. The songs here are from all over the last three decades and focus on the classical definition of pop-punk: 'bands who really like the Ramones', as opposed to the mainstream definition of; 'bands who really like Blink 182' (NTTAWWT). This coulda been a box set, so if you feel slighted your time to contribute to volume two is almost at hand...

The Apers - "Almost Summer"
Screeching Weasel loving Dutch boys who really know how much a pop songs needs to be both catchy and an expression of painful longing.

The Undertones - "Here Comes the Summer"
Northern Ireland's pop-punk masters shoulda had a monster hit with this one.

Ronnie Mayor - "Can't Wait Till the Summer Comes"
Late seventies UK power-pop is a totally part of the pop-punk continuum.

The Parasites - "First Day of Summer"
One of the best songs from probably the finest album of Dave Parasite's lengthy career.

Ramones - "Rockaway Beach"
You knew THE defining band of pop-punk had to make the list, even if they don't have a song with summer in the title.


The Fastbacks - "In the Summer"
Kurt Bloch remains one of of the most neglected song-writers of his generation and this song is one of my favourites of his.

Hüsker Dü - "Celebrated Summer"
A band who influenced almost every subsequent pop-punk band, without ever playing by any of the genres ultra-stringent rules.

The Barracudas - "Summer Fun"
I love every nano-second of this song by these original UK Beach-punks.

The Kung Fu Monkeys - "Summer School" (almost)
From the twee side of pop-punk comes this fun New York band who've been around forever.

The Ataris - "The Boys of Summer"
Okay just to piss a few people off, one song from the post-Blink school of pop-punk*, showing off one of the tricks that unites the two schools - amping up cheesy pop hits.
*though one could well argue the band had paid their dues earlier on.

Chixdiggit - "Brunette Summer"
It's Chixdiggt, nothing more need be said.

The Queers - "The Sun Always Shines Around You"
Lookout Records called their Queers 'Best Of' compilation, Summer Hits becuase that summery feeling pervades a lot of thier best songs.

Ben Weasel - "Summer's Always Gone Too Soon" (alternate Weasel summer song)
Following the debacle at SxSW, it kinda looks like Ben's going through an identity crisis as he tries to decide where his belligerent persona ends and Mr. Ben Foster the man begins. Whatever the result of his troubles, Ben will re-emerge because he's one of the best lyricists this genre has ever produced.

So tell us what you make of the songs on the list and what songs you think might make it on to a Volume Two. (If you wanna put the whole thing on your music-listening device, there's a link in that section as well)

Email ThisBlogThis!Share to TwitterShare to FacebookShare to Pinterest
Labels: Pop-Punk