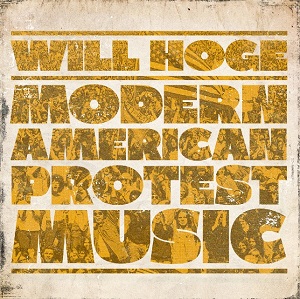 With the words he spits out on Modern American Protest Music condemning  America's over-seas wars, homophobia, global warming denial, the 1%'s game-fixing, Florida's Stand Your Ground law and religious intolerance, I'm sure that Nashville roots-rocker Will Hoge's going to pull the lever for Obama tomorrow. However, that doesn't mean any element of the contemporary political scene is coming away unscathed from this howling series of broadsides, or as the narrator of "Founding Fathers" puts it "Democrats, Republicans, who's to blame, its hard to tell/Sometimes I think we'd be better off if they all just went to Hell".

Musically, Hoge is a kin to Steve Earle but with less of that coffee-house-song-writer bent and more of hell-bent Stones-y bar rock sound. For this release, Hoge has kept the big-guitar roar but now he's employing it to lay waste to the American political landscape. The pox-on-all-their-houses rocker "Founding Fathers" kicks things off in high gear, then it's a talking-blues, "Jesus Came to Tennessee" which oughta offend ever unthinking Christian in the country, followed by the mournful ballad, "Folded Flag'. The angry, pleading "When Do I Get to Come Home?" brings the noise back, while the Dylan-referencing "Times Are Not Changing" (which actually channels the liberal-knifing spirit of Phil Ochs) brings a little folk to the mix. For the anti-fundamentalist, "I Don't Believe You", the guitars are replaced by piano for a few minutes before Hoge's guitar tone and his outage hits apoplectic levels on "The Ballad of Trayvon Martin. Overall, it's a helluva performance, one to be reckoned with long after November 6th 2012 has come and gone.

HOMEPAGE
Posted by jeffen at 5:46 AM

Email ThisBlogThis!Share to TwitterShare to FacebookShare to Pinterest
Labels: Will Hoge