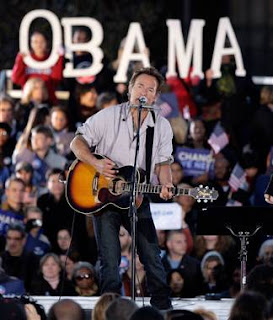 Bruce Springsteen's 2012 anthem, "We Take Care of our Own" works as both an exhortation for the present and a condemnation of past failings. Now with Hurricane Sandy showing how it takes a massive and awe-inspiring co-ordination of local, state and federal governments to help people in crisis, Springsteen's song sounds positively prophetic. The storm has effectively silenced those who, like Governor Romney, say that things like disaster relief would be better handled by the private sector alone. The storm has also made allies of the straight-talking if occasionally mean-spirited New Jersey governor Chris Christie and President Obama. That means it's only a matter of time before Christie can finally meet Springsteen (heard here stumping for the President) on common ground; the restoration of their beloved home state.

Recorded 15' from the stage under the stack.
Zoom H4>Soundforge>CDWave>Flac
a G Squared recording


Bruce played an afternoon acoustic show
at the Obama for America rally prior to
that evenings show at John Paul Jones Arena. 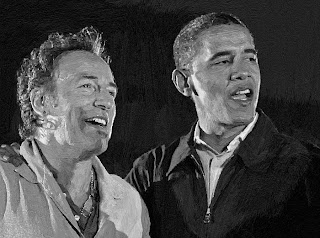 Bruce Springsteen Homepage
Posted by jeffen at 6:36 AM