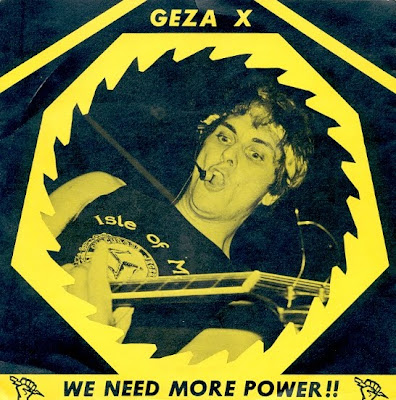 Geza X, a key producer, solo artist, inventor and musical theoretician of the early California punk scene, is one odd duck. His notoriety began with his production work for the Dead Kennedys, the Germs, Black Flag, the Avengers and the Weirdos. The of course he pioneered the use of the now-ubiquitous face mikes (a.k.a. head-mounted mikes) and the less-popular Gezatone guitar. Using said guitar he led a band called the Mommymen through a series of singles, e.p.'s. He and the band also appeared on compilations such as Jello Biafra's Let Them Eat Jellybeans where they add the weirdly wonderful, "Isotope Soap" and Rodney Bingenheimer's Rodney on the Roq where they contributed the thundering "We Need More Power." 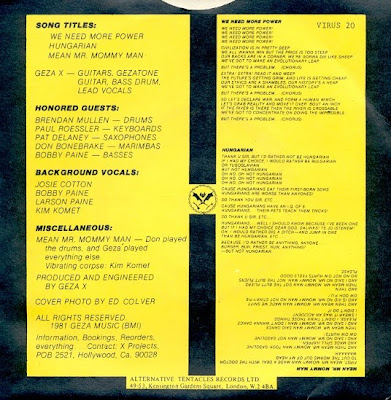 "We Need More Power", with it's shredded-speaker guitar sound has held me in thrall since I first heard it as a teenager. Geza called their sound, "x-music", a sort of art-school punk but filled with saxes and marimbas as well as slashing power-chords and squiggly leads. It's like an experiment to cross-breed Devo with AC/DC performed in Captain Beefheart's laboratory. If that doesn't sound promising, Geza always does.

Lee Jospeh reminds us that we can now buy Geza X albums at Dionysus Records!
Posted by jeffen at 7:20 AM