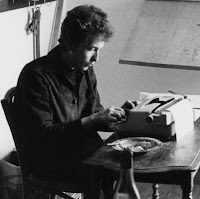 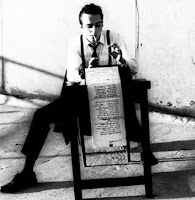 To me, Bob Dylan and The Clash's Joe Strummer are inextricably linked. On the personal level, it's because Dylan's Greatest Hits and The Clash's London Calling became sanctuaries for me during the worst year of my life. Specifically, it was those words, those lunatic, manic words of Strummer and Dylan's that provided refuge, as I copied verse-after-verse out into my notebook, while the fear and loneliness swirled around me.

The personal aside, there is a great deal that connects these two titans. Certainly, Strummer and Dylan both shared the same record label, both used Woody Guthrie homages to cover up their middle-class roots in their earliest years, both mixed pop and politics to great effect, both went to hell in the eighties and had an upswing at the dawn of the 21st century, both loved using those "flashing chains of images" in their lyrics and, to different degrees, both bore the Voice of a Generation burden. Perhaps most significantly, they were always great admirers of each others' work. To wit:

* Strummer appeared on a BBC feature on Dylan's 60th birthday (alongside Stevie Wonder!) where he can be heard singing Dylan's praises not to mention performing "Blowin' in the Wind" and "Just Like Tom Thumb's Blues".


* According to Strummer biographer Chris Salewicz, Columbia press officer Ellie Smith gave Dylan a copy of The Clash's self-titled album when he was in England in 1978, which Bob loved.
* The Clash covered Dylan's "The Man in Me" (likely spurred by the reggae arrangement by Britain's Matumbi that bassist Paul Simonon had installed in the band's rehearsal space jukebox.)
* Dylan partially covered "London Calling" on his show at the Brixton Academy in November of 2005.


* As payback Dylan played "This is Radio Clash", "Tommy Gun", "Train in Vain", "The Right Profile" and The 101'ers "Keys to Your Heart" on his show, Theme Time Radio Hour.


* According to Salewicz, once again, Dylan gave Strummer a tape of a song that that Bob wanted Joe to record but that Joe never took the tape out of the drawer. As this incident occurred around the time of Dylan's pitiful Down in the Groove, (on which Clashman Paul Simonon played bass alongside Sex Pistol's guitarist Steve Jones on the track, "Sally Sue Brown") Strummer's neglect may be forgivable.


* According to Clash biographer Pat Gilbert, the band did two cover songs to warm up for the London Calling recording session, one instrumental from Dylan's soundtrack to Pat Garrett and Billy the Kid and a version of Vince Taylor's "Brand New Cadillac" so good that madman producer Guy Stevens (who's bathroom contained two pictures: one of Dylan and one of Hitler!) ran in yelling, "It's a take!" (Years later that same soundtrack would be Strummer's model for his own work scoring Alex Cox's film, Walker.)
* Dylan brought his entire family, about forty people all in all, to see The Clash play in St. Paul, Minnesota in 1979 (turning Jakob into a life-long fan as this video will demonstrate:)
* Strummer's final tour was called "Bringing It All Back Home", a Dylan album title he'd already borrowed for the song "Global-A-Go-Go" ("Everywhere, everywhere Bob's bringing it all back home").
* (And it's hard to forget that the combination of Strummer and Dylan, not to mention Chuck D., remains the gold standard for articles on complaint-rock.) 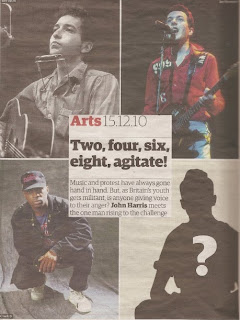 As two of rock n' roll's great men of words, Strummer and Dylan have much in common and much separating them but for those of us who strain to catch every verse, there remains a wealth of connections between them.

Let us know your thoughts on this Dylan-Strummer connection - it's what the 'comments' are for!!