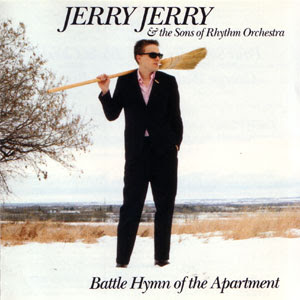 "Turn around and be some one better; time permitting and shit."
Jerry Jerry
In 1986 Jerry Jerry and his ever-changing Sons of Rhythm Orchestra emigrated from Edmonton, Alberta to Montreal, Quebec. The band moved from Og Records, to the Doughboys' 1st home, Piepline Records before settling on their final label, Aquarius Records (home of great Can-Crap from April Wine to Corey Hart to Sum 41).

For Battle Hymn of the Apartment (1987) Jerry found his definitive band, with Paul Soulodre (guitar,vocals) George Wall (guitar,vocals) Duke Bronfman (drum, vocals), future Asexual Blake Cheetah (bass), not to mention backing horns, keyboard and a vocal trio. As the credits suggest there are layers and layers of vocals here and all those voices underpin Jerry's role as the leader of a strange midnight choir. For proof of how this ensemble feeds Jerry's "Pusher for Jesus" personae - give this track a listen.

On this album Jerry Jerry really claims his voice and that voice is a whiskey-and-cigarette soaked baritone that fires off venomous sermons. The Sons of Rhythm Orchestra are a super-tight unit that propel Jerry, turning his gospel and R n' B pastiches into torn flesh and dripping blood rockers. 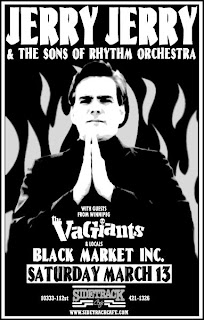 {MRML Readers weigh in with a comment: is this Jerry's master work or an act of brazen musical theft?)

Download Battle Hym of the Apartment CD
Posted by jeffen at 7:15 AM