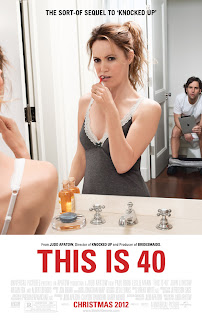 I saw "This is 40" last night becuase I still trust the Apatow brand and for the Graham Parker sub-plot, naturally. Everybody came through, though Apatow's plots are getting thinner even as his ability to work wonders with sprawling cast is rising to Robert Altman-esque levels. Parker was dead hilarious, as anyone who's watched him on stage or recently would guess. One of the MANY strong turns (John Lithgow, Albert Brooks, Charlyne Yi, Melissa McCarthy) was, surprisingly, Bille Joe Armstrong from Green Day who's never struck me as very good cameo material. Billy Joe's taunt of Chris O'Dowd oughta make it into the vernacular but this deleted scene (via diffuser.fm) is a must-see for all rock geeks!