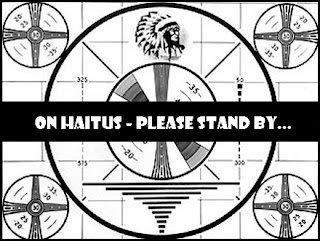 Sorry, no one obvious reason for the hiatus but if you wish to know more (and if not STOP NOW!), here are some of the thoughts rattling around inside my thick skull.


1) My Life
Y'ever wake up at 4:00 a.m. and ask, "What the fuck am I doing with my life"? Yeah, it's part of getting old (or being David Byrne) but some questions need to be answered. It's not that this blog is to blame for my oh-so-cliché early-morning navel-gazing (apparently I've already charged music itself with all the life-ruining) but it does eat up a surprising amount of my time.

2) Uploading
It seems every storage locker (Sharebee, MediaFire, RapidShare etc.) falls eventually, taking all your uploads with it. Then you have to decide if you're going to restore material or not and blah, blah, blah. To get to the point, offering out-of-print, unavailable music has gotten ever-more complicated over the years and remains a looming concern for me personally.

3) Blogger
It seems the audience for a lot of blogs, MMRL included*, is shrinking and that decline may spur Google, who are willing to sacrifice any of their creations to the Baal that is Google+, to disembowel this great platform. This fear of Google gutting Blogger the way it did Reader is argument enough to eye the future warily.

4) Company
So, not only are audiences in decline but a lot of my Blogger friends have quit over the years and since new music blogs seem relatively rare, this little corner of the internet is definitely feeling a bit endangered.

5) Commenters
I've got a lot of regular (and proudly irregular) commenters and, truth is, it is they who have kept me in business this long. But sometimes there still seems to be a worrisomely low level of idea-sharing both here and on a lot of the music blogs I frequent. There's any number of reasons for this, which I've covered ad nauseum on other 'where-the-fuck-are-the-comments posts' over the years. Suffice it to say here, that I'm currently looking at the different impediments to dialogue, such as the fact that it's harder to leave a comment, or a note of encouragement, on Blogger then it is on many other social networks...

6) Social Networks
Sigh. I hate Facebook and I'm not sure I can even make a group page entirely unconnected to my actual name there anymore, so I'm giving Twitter (another) shot. If this Twit shit sticks, I'll do some kind of Grand Opening post (you can see my sad little feed on the widget to your right) but in the meantime it's just a low-level experiment.


This isn't meant as a laundry list of complaints (and I've re-read it looking for excess whinging), just as a catalog of the major thoughts I've reviewing before taking the next step.

Feel free to add your voice to the comments section.


* That said, despite being an almost post-less month I've been racking up huge visitor numbers due to a couple of old posts making the rounds - t'is a strange ole world...

Email ThisBlogThis!Share to TwitterShare to FacebookShare to Pinterest
Labels: Not Quitting