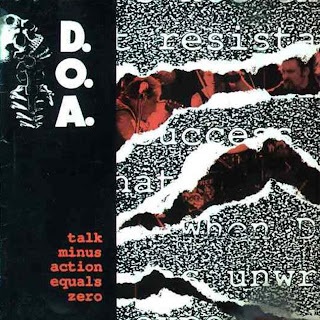 D.O.A. lived to play and it was on the stage that they thrived. Just read Joey Keithley's autobiography, I, Shithead there's no lengthy discussion of song-writing or even recording - it's essentially one long tour diary (and a must-read for fans). So, just before their only real break-up D.O.A. recorded the inevitable live album.
(It was the original incarnation's final days, especially their gig as Drunks On Acoustics, that inspired punk rock's most significant contribution to literature, Micheal Turner's novel, Hardcore Logo. The book, in turn, was the basis for a very good (if not truly great) film by Bruce McDonald. Joey was pretty testy about the book in an interview during filming, he had a right to be; the book is to D.O.A. what This is Spinal Tap was to Status Quo but more specific and more bleak than funny.

The performances on this 1990 live album, Talk - Action = Zero, are solid, though it's not the monster that the battle-hardened, Dave Gregg-powered version of the band would have cut a few years earlier. Fortunately, we still get to hear the band breaking free of the production excesses that marred some of their later work. Here you get a tight, speedy run-through of their catalog with an emphasis on The Early Stuff ("The Prisoner", "Liar for Hire "2 + 2" etc.) . To keep things interesting there's a blues version of "Fuck You" (or at least it starts that way), some roughed-up versions of Let's Wreck the Party material (the title track loses much of its sluggishness here) plus two unreleased songs (the none-too-inspiring "Do or Die" and "Fuck That Shit"). 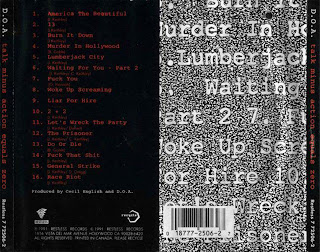 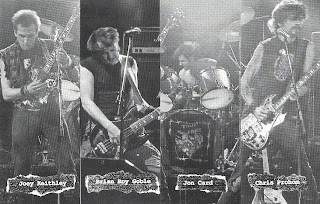 P.S. As our run celebrating the Canadian-as-fuck D.O.A winds down, I'd just like to wish you all a happy Canada Day (yup our national day is three days before the Americans.) To see 7inchpunk's selection of great Canadian punk singles (including yet more D.O.A.) click HERE.
Posted by jeffen at 9:47 AM