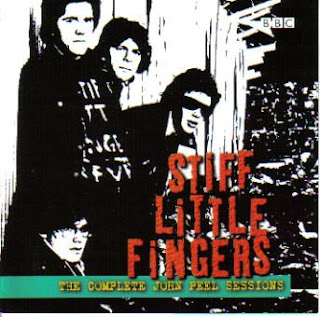 Belfast's Stiff Little Fingers had one of the best runs of the seventies punk bands. They grew, musically, lyrically and melodically with each release, yet never hit a false note, never undersold themselves, never surrendered. Then, in 1982, they broke up. They re-formed in 1987 and there followed a slew of live albums and uneven studio works that, while never terrible, muddied their record a bit. Over their entire career, however, there is a brilliant through-line of staunchly independent thinking driven home by a raucous hammering guitar sound .

It's undeniable that the first two albums, Inflammable Material and Nobody's Heroes, are S.L.F.'S masterworks. That being said, despite some duff tracks the original band's final albums Go For It and Now Then... do make a strong break for adulthood without watering down the passion of the band, especially that of singer/guitarist Jake Burns. Jake, like Joe Strummer, Mike Peters and maybe even his fellow countrymen Bono, has a broad earnest streak, a heart-on-sleeve-for-daws-to-peck-at-it openness which, while occasionally melodramatic, buoys his material over the ruthless pop climbers that blight any era's pop charts.

Here's some raw Stiff Little Fingers recorded between 1978 and 1979 at the BBC under the auspices of that patron saint of fuck-ups, John Peel (R.I.P.). 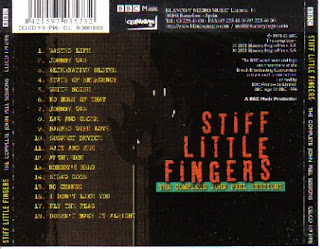