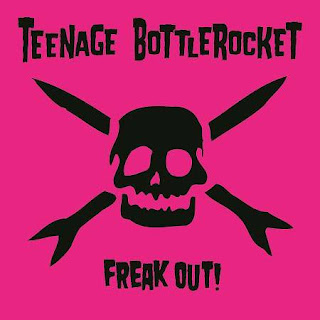 There've been rumbles that Teenage Bottlerocket's new album, Freak Out!, is uneven but that's just part of their M.O. As long as the ratio of hits to hmmm's remains this high we can all be fuckin' thankful that these Wyomingites are like no band on earth. Okay, it's a pop-punk album by a pop-punk band but hook-filled tracks "Maverick", "Done With Love", "Never Gonna Tell You" and "Summertime" up the pop to dangerously cool levels. Also, there's a metallic undercurrent here exemplified, poorly, in "Cruising for Chicks" and excellently in  "Headbanger" (explained here).

So sure Freak Out! has some filler tracks (though few agree which ones) but even Screeching Weasel's My Brain Hurts has a couple weaker tracks. And sure TB re-recorded re-used the originals from last year's Mutilate Me E.P.  but the Mr. T Experience did the same thing for Milk, Milk Lemonade and who (other than me!) remembers that now?

TEENAGE BOTTLEROCKET!
Posted by jeffen at 10:09 AM